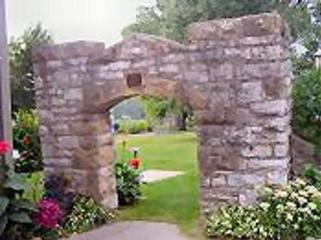 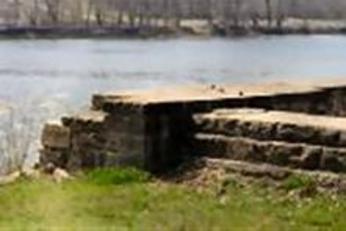 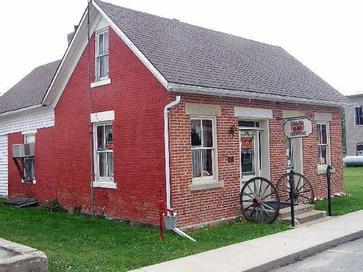 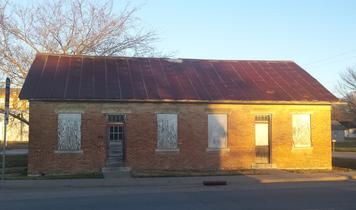 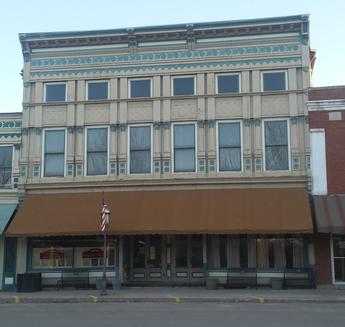 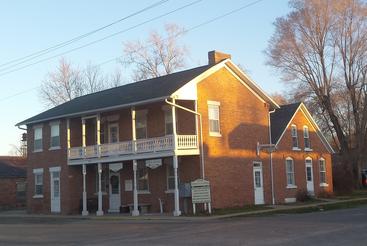 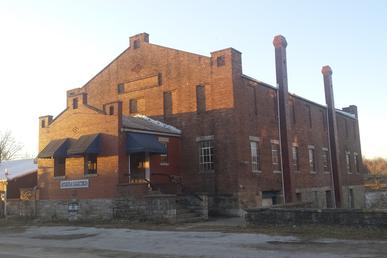 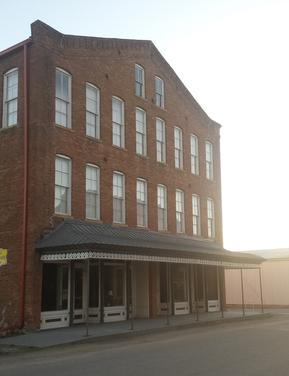 Presbyterian Church c. 1901
Built with a cost of $6,500 and replaced the original church. The structure could seat 250 and was constructed of pressed brick and Bedford stone. The land where the church sits was donated by Dr. RN Cresap, an early founder of Bonaparte.

Baptist Church
Built on the site of the former church in 1904 using stone from the old church. Known originally as the Mt. Zion Baptist Church. Cornerstone was laid in August 1903 with first services held April 3, 1904.

Band Shell 1920
Located in Bonaparte's Historic Riverfront Park, was home to many concerts and a variety of entertainment throughout the 1900's. Bonaparte Main Streets hosts Movies in the Park during the summer months, and has been completely refurbished in 2012/2013.

Hinish Building 1903
Joseph Hinish, born in Kralowitz, Bhoemia, came to America in 1862 and was a tailor by trade. Notably the Des Moines River lies directly at the back door.

Cresap Building c. 1900
One of Daniel Cresap properties, this building sits upon the site of Bonaparte's 1st hotel, which was built in 1840. Known originally as the Tavern, later to become the "Eason House" which was destroyed by fire in 1894. The Cresap building has had a variety of uses over the years, once as a furniture store, later as the "Fair Store", it even contained a movie theater on the upper level in the 1920's.

Woolen Mill c. 1863
Once another two stories taller than it's present size, this building was home to Meek's Woolen Mills, a major manufacturer of woolen goods in the central part of America. The front entrance was completed and top two stories were removed by WPA workers in the late 1930's.

Auntie Green Hotel c. 1844
Currently owned by the Bonaparte Historical Society and houses Auntie Green Museum and city library. On the upper porch level, one can still see the gate in the railing where luggage from stage coach arrivals was unloaded for quick access to the guest rooms

Hanback Pottery Works c. 1866
Built by Thomas Hanback, later known as Parker & Hanback, and yet later as Hanback & Wilson. At it's peak, the pottery produced over 125,000 gallons of pottery per year as well as drain pipe, flower pots, and fire-proof bricks. It is the only remaining pottery of it's kind in Iowa and considered an archaeological treasurer.

Meek Pants Factory c. 1892
Built by Isaiah Meek, this factory, along with the woolen and grist mills, were in their time known as being among the leading manufacturing interests of the west. For decades, this facility was home to the Fairfield Glove Factory, now private residence.

Meek's Grist Mill c. 1878
Built in 1878, at a cost of $15,000, this is a well-preserved and superb example of a water-powered flour/grist mill associated with riverside towns throughout much of the 19th century. The original mill on this site was erected in 1844 by William Meek. Since 1977, this mill is now home to the award-winning
Bonaparte Retreat Restaurant.

ENJOY YOUR VIRTUAL TOUR OF BONAPARTE 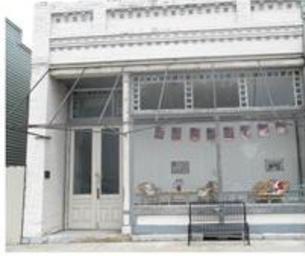 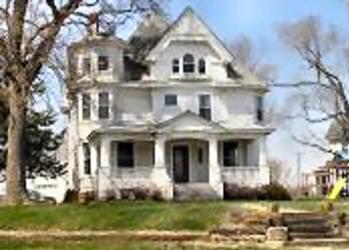 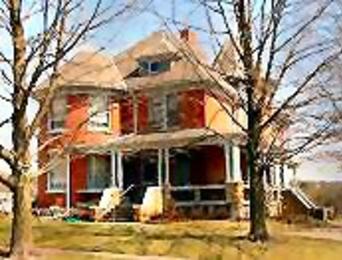 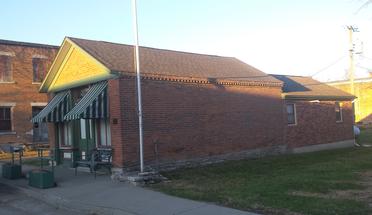 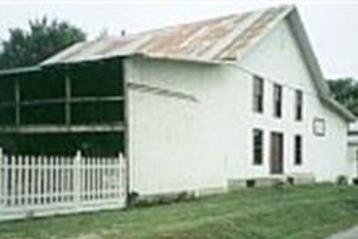 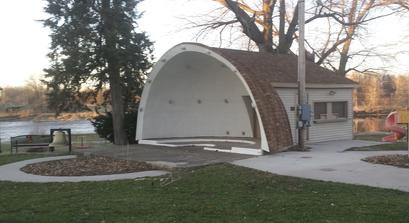 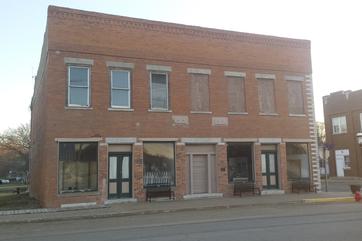 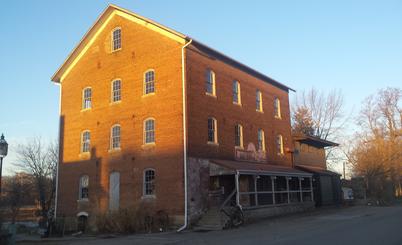 Johnson-Bogle Home 1856
Built by Wm. J Johnson who came to the community in 1837. Directly across the street lived his sister, Mrs. Thomas (Sarah Caroline Johnson) Christy. Johnson's wife, Mary Jane, was the sister of Thomas Christy. Partners in the long-time "Christy and Johnson" firm. Sold home to the husband of his granddaughter, Dr. Wm. I Bogle, for $2,000 in 1906. A private residence today.
​

Thomas Christy Home 1839
Thomas Christy, merchant, stone mason, founder of the Farmers & Traders State Bank, and was in charge of building the first river bridge in Bonaparte. The iron fence around the home was set in lead and the hand-hewn stones were fitted together with no mortar between them. The first kerosene lamp in town was brought to this home by Mr. Christy, as well as the first piano, which was purchased in Boston, and brought by riverboat.

Des Moines River Lock #5
One of three structures remaining from the Des Moines River Project, but was ended in 1858, as the result of mismanagement and threat of competition from Keokuk & Des Moines River Railroad. The lock is constructed of large blocks of a locally quarried limestone, set on a limestone bedrock foundation

Fowler Home c. 1850 ​Early 1 1/2 story cottage and may have been a duplex or business office. For many years in the early to mid 1900's, was the office of the Bonaparte Telephone Exchange.

Poe Building 1850
One of 3 early brick duplexes. A 1909 map shows the left side as Telephone Exchange office. Perhaps built at the time of the Mormon encampment, similar in design to Mormon structures in Nauvoo, Illinois.

Bonaparte Drug Company c. 1894
An example of the late 19th century commercial block style building, which is constructed of brick with a limestone foundation. It is a 1-story building with pitched roof with brick parapet. The parapet displays the characteristic brick pattering of the commercial block style. The facade is divided into 3 asymmetrical bays with the door on the far left.

Farmers & Traders Bank c 1845-50
One of the earlier Cresap buildings in the community, and believed to be built at the time of the Morman Encampment. Originally housed Bonaparte's first bank in 1882, later a marble works, city library and town hall. 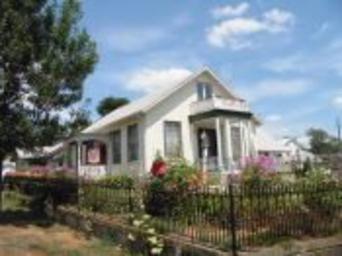 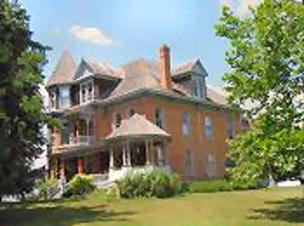 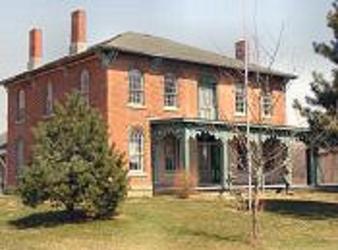 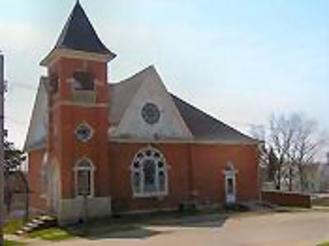 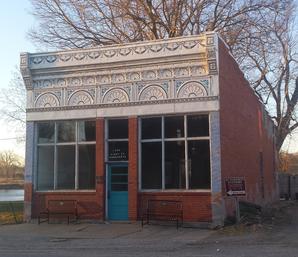 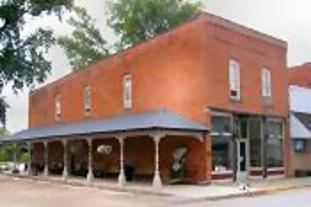 Daniel Cresap Home 1890
This 2 1/2 story vernacular Queen-Anne house with its large turret, and low-stone wall which borders this property. Dan Cresap was a prominent businessman and civic leader, and was responsible for the handle factory and involved in various businesses and buildings in the downtown area. A private residence today.

stutzman Home 1903
Built for the widow of Dr. D.W. Stutzman who practiced medicine in Bonaparte since 1867. One of the community's loveliest and stately homes sitting atop Washington Street, has served as a private residence, boarding house, and nursing home. Now lovingly restored to its former glory and is again a private residence.

Robert Meek's Hillcrest House 1865-1870
Built by Robert Meek, son of William Meek, founder of Meek's Mills, which was later known as Bonaparte. Built high on a hill overlooking the Meek Brothers Mills, by one of the most important men in the community, as a mansion and symbol of his influence. Has been a private home, apartment house, bed & breakfast, and is again a lovely home today.

Isaiah Meek Home 1848-1853
Located just west of Bonaparte on the river road. Isaiah's father, William Meek, came to Van Buren County in 1837 and was among the earliest settlers at a time when Iowa was still a part of the Wisconsin Territory. Along with his sons, Isaiah, Robert, and Joseph, were the owners and operators of various Meek Mills.
http://iagenweb.org/boards/vanburen/biographies/index.cgi?review=1000

Christy Mercantile Block c 1853
One of Bonaparte's commercial district dating back to the mid-1800's. Thomas Christy was an early pioneer of Bonaparte and one time member of the state legislature.

Coolidge Building c. 1860
The Coolidge family were long-time businessmen operating a dry-goods establishment in Bonaparte, headed by the father, Henry Sr., and carried on by sons Orlando J and Henry L . In the late 1900's, this building was home to Troutman Hardware store. 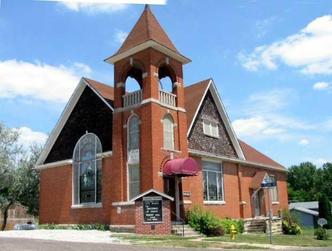 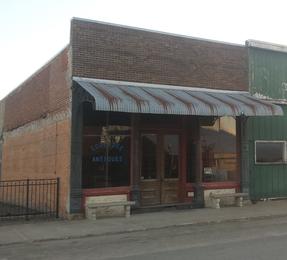